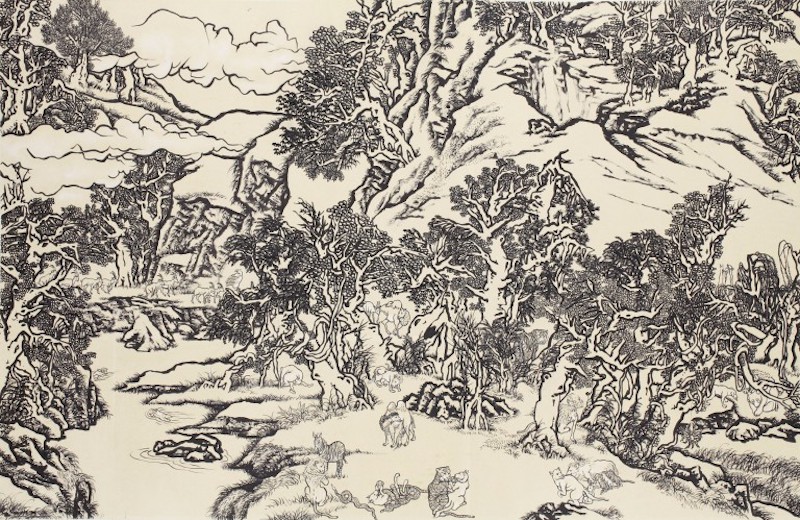 More than thirty years after the first exhibition of his works in Europe, during the Magicians of the Earth at the Centre Pompidou, the Chinese artist Yang Jiechang humbly enters the heart of the Guimet Museum. In the rotunda of the National Museum of Asian Arts, The Tale of the 11th Day, an erotic utopia where man and animal enter into communion, unfolds over some 18 meters long. If the idealism of this painting, whose name is inspired by Boccaccio's Decameron, can make us think of the idyllic autarky in which the characters of the collection live, sheltered from the plague that was ravaging Florence at the time, and thus evokes a retreat into a form of interiority, the work of Yang Jiechang is not impervious to the events that strike our contemporary world. Underground flowers or the dyptic Oh my God / Oh Diu, present in the Chinese galleries of the museum, testify to the violence and shock provoked by the Tian'anmen massacre in 1989 and by the attacks of September 11, 2001. Within his works, Yang Jiechang plays on ambivalence with finesse and delicacy to draw us into the search for a salutary balance that has its roots in Taoism, a religious and philosophical doctrine whose origins date back to the 6th century B.C.: behind all harmony lies a continuous tension between two antagonistic but complementary poles, whose balance is always to be redefined, in the manner of the Ying and the Yang. Cathartic, the act of painting reveals the complexity of the artist's relationship to the world around him, and it is through an oscillation between tradition and modernity, utopia and reality, inky black and light, that this contemporary scholar finishes teaching us that everything is a question of balance.