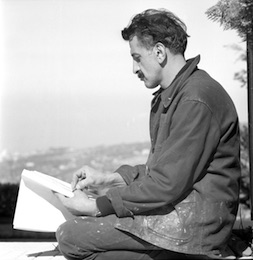 Born in Lebanon in 1926 and deceased in Paris in 2004, Shafic Abboud is without doubt the most important Lebanese and Parisian artist of the second half of the 20th century. Arriving in Paris in 1947, he integrated perfectly into the intense artistic life of the post-war period. In 1959, he was the only artist from the Arab world to participate in the first Paris Biennale and, in the 1960s and 70s, he was one of the major players in the cultural and artistic life of Beirut, the city of light of the entire Arab Near East. His painting evolved from Lebanese Poetic Figuration to Parisian Lyrical Abstraction, and then to a subtle and sublime form of Abbey Transfiguration, which is at once ancient and modern, pagan and sacred. His work is a manifesto for Modernity, freedom, colour and light, a permanent bridge between France, Lebanon and the Arab world.